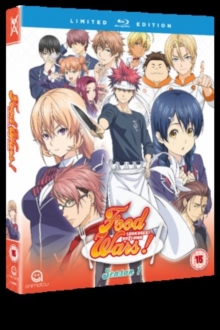 All 24 episodes from the first season of the animated series based on the manga by Yuto Tsukuda.

Since a young age Souma Yukihira (voice of Yoshitsugu Matsuoka)'s passion has been cooking, having worked as the sous chef in his father's restaurant.

When his father decides to test his skills in establishments around the world he sends Souma to attend Tootsuki Culinary Academy.

Infamous for its 'food wars' between students, and for the fact that only 10% of the students achieve graduation, the school is the next step in Souma's quest to be a legendary chef.

The episodes are: 'An Endless Wasteland', 'God Tongue', 'That Chef Never Smiles', 'The Madonna of the Polar Star', 'The Ice Queen and the Spring Storm', 'The Meat Invader', 'A Quiet Don, an Eloquent Don', 'The Concerto of Inspiration and Imagination', 'The Breading to Adorn the Mountains', 'The Heavenly Recette', 'The Magician from the East', 'The Memory of a Dish', 'The Eggs Before Dawn', 'Metamorphosis', 'The Man Called Demon', 'The Chef Who's Crossed a Thousand Leagues', 'The Seductive Karaage', 'The Karaage of Youth', 'The Chosen One', 'The Dragon Lies Down and Ascends the Skies', 'The Unknown Known', 'The One Who Surpasses the Ordinary', 'The Competition of the Blossoming Individuals' and 'The Banquet of Warriors'.