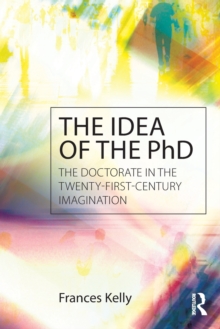 The Idea of the PhD : The doctorate in the twenty-first-century imagination Paperback / softback

by Frances Jennifer (The University of Auckland) Kelly

The Idea of the PhD: The doctorate in the twenty-first-century imagination analyses the PhD as it is articulated in diverse areas of contemporary discourse at a time in which the degree is undergoing growth, change and scrutiny worldwide.

It considers not just institutional ideas of the PhD, but those of the broader cultural and social domain as well as asking whether, and to what extent, the idea of the Doctor of Philosophy, the highest achievable university award, is being reimagined in the twenty-first century. In a world where the PhD is undergoing significant radical change, and where inside universities, doctoral enrolments are continually climbing, as the demand for more graduates with high-level research skills increases, this book asks the following questions:How do we understand how the PhD is currently imagined and conceptualised in the wider domain?Where will we find ideas about the PhD, from its purpose, to the nature of research work undertaken and the kinds of pedagogies engaged, to the researchers who undertake it and are shaped by it?

International in scope, this is a text that explores the culturally inflected representation of the doctorate and its graduates in the imagination, literature and media.

The Idea of the PhD contributes to the research literature in the field of doctoral education and higher education.

As such, this will be a fascinating text for researchers, postgraduates and academics interested in the idea of the university.