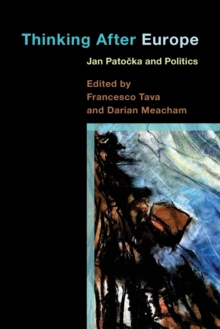 Jan Patocka, perhaps more so than any other philosopher in the twentieth century, managed to combine intense philosophical insight with a farsighted analysis of the idea and challenges facing Europe as a historical, cultural and political signifier.

As a political dissident in communist Czechoslovakia he also became a moral and political inspiration to a generation of Czechs, including Vaclav Havel.

He accomplished this in a time of intense political repression when not even the hint of a unified Europe seemed visible by showing in exemplary fashion how concrete thought can be without renouncing in any way its depth. Europe as an idea and a political project is a central issue in contemporary political theory.

Here, for the first time, a group of leading scholars from different disciplines gathers together to discuss the specific political impact of Patocka's philosophy and its lasting significance.