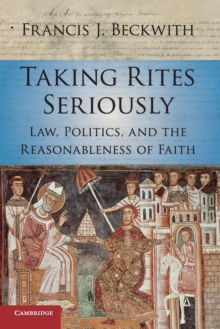 Taking Rites Seriously is about how religious beliefs and religious believers are assessed by judges and legal scholars and are sometimes mischaracterized and misunderstood by those who are critical of the influence of religion in politics or in the formation of law.

In the process, he responds to some well-known critics of public faith - including Brian Leiter, Steven Pinker, Suzanna Sherry, Ronald Dworkin, John Rawls, and Richard Dawkins - as well as to some religiously conservative critics of secularism, such as the advocates for intelligent design.