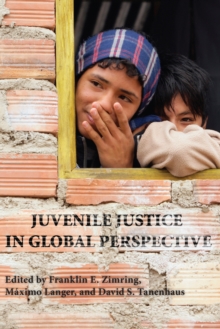 Part of the Youth, Crime, and Justice series

This important volume fills a large gap in the study of juvenile justice by providing an unprecedented comparison of criminal justice and juvenile justice systems across the world, looking for points of comparison and policy variance that can lead to positive change in the United States. Distinguished criminology scholars Franklin Zimring, Maximo Langer, and David Tanenhaus, and the contributors cover countries from Western Europe to rising powers like China, India, and countries in Latin America.

Furthermore, the book uses its data on criminal versus juvenile justice in a wide variety of nations to create a new explanation of why separate juvenile and criminal courts are felt to be necessary.