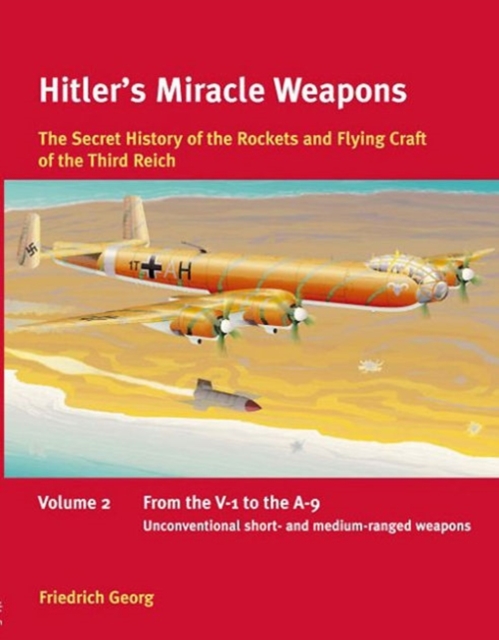 Hitler'S Miracle Weapons Volume 2 : The Secret History of the Rockets and Flying Craft of the Third Reich Volume 2: from the V-1 to the A-9, Unconventional Short- and Medium-Ranged Weapons Paperback / softback

Following on from the success of volume one, Friedrich Georg's second book in the series covers unconventional short- and medium-range weapons.

In particular, this volume includes a wealth of information about the V-rocket programme, not just the more familiar V-1 and V-2, but special variants of these two rockets as well as later experimental craft and weaponry.

These little-known variants include the V-2 A-4 'America Rocket', and V-2s designed to carry nuclear and radiological warheads.

The capability of the Germans to deploy such weapons is also discussed.

A large number of weird and wonderful projects that never left the drawing board are examined, including the FR-35, V-6, V-101, Waterfall and Naval EMW A-7 rockets.

The fascinating final section examines German plans to utilise such rocketry against London and Paris in 1945, as well as recounting the activities of V-weapons on other fronts, including Italy, Yugoslavia and the Eastern Front. The text is supported by b/w photographs and 16 superb pages of colour artwork, including profiles, computer-generated images of designs that never flew and pictures of the author's own models. About the AuthorFriedrich Georg is an acclaimed weapons specialist and World War II historian, focusing primarily on the secret developments of Hitler's Germany.