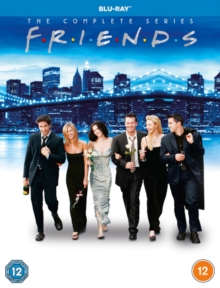 The ultimate collection for every 'Friends' fan, this box set contains every episode ever made of the phenomenally successful US sitcom, which centres around the lives and loves of six attractive 20-something New Yorkers: Ross (David Schwimmer), Rachel (Jennifer Aniston), Chandler (Matthew Perry), Monica (Courteney Cox Arquette), Joey (Matt LeBlanc) and Phoebe (Lisa Kudrow).

The series began in 1994 with the episode 'The One Where it All Began', where Rachel jilts her man at the altar and comes into the lives of the rest of the gang. And finished with the two-parter 'The Last One' in which Ross is desperate to be with Rachel, but she is set on going to Paris.

He and Phoebe chase her to the airport, but accidentally go to the wrong airport.

They manage to get to the right airport just in time, and Ross tells Rachel he loves her, but, in a dazed state, she gets on the plane anyway...

Chandler and Monica finish packing for their move to the suburbs, and the friends bid each other an emotional goodbye.