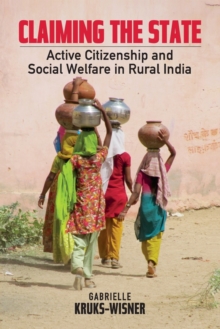 by Gabrielle (University of Virginia) Kruks-Wisner

Citizens around the world look to the state for social welfare provision, but often struggle to access essential services in health, education, and social security.

This book investigates the everyday practices through which citizens of the world's largest democracy make claims on the state, asking whether, how, and why they engage public officials in the pursuit of social welfare.

Drawing on extensive fieldwork in rural India, Kruks-Wisner demonstrates that claim-making is possible in settings (poor and remote) and among people (the lower classes and castes) where much democratic theory would be unlikely to predict it.

Examining the conditions that foster and inhibit citizen action, she finds that greater social and spatial exposure - made possible when individuals traverse boundaries of caste, neighborhood, or village - builds citizens' political knowledge, expectations, and linkages to the state, and is associated with higher levels and broader repertoires of claim-making.