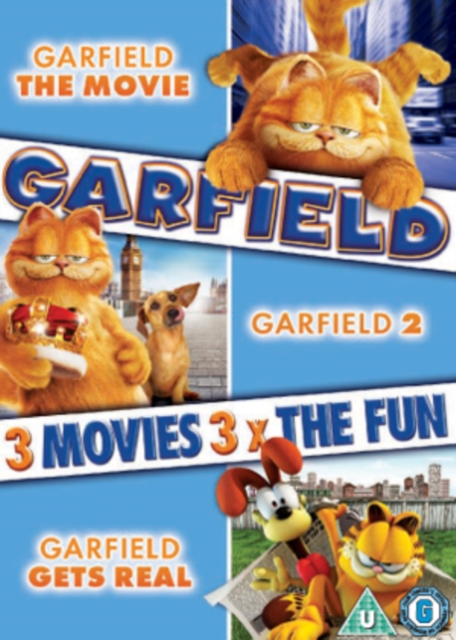 In 'Garfield - The Movie' (2004), Jon Arbuckle (Breckin Meyer) and his pet cat Garfield (voice of Bill Murray) live in harmony together - until Jon introduces a new member to the family: Odie the loveable pooch.

Jon adores Odie, not least because having two pets means twice as many trips to visit the the vet, Dr Liz Wilson (Jennifer Love Hewitt), with whom he is totally besotted.

But Garfield is less keen, and orchestrates a 'dognapping' that he hopes should get rid of his rival once and for all.

In 'Garfield - A Tale of Two Kitties' (2006), Jon (Meyer) is on his way to London to propose to his veterinarian girlfriend, Liz Wilson (Love Hewitt), and his unflappable cat, Garfield (voice of Murray), is determined to be there when Jon pops the big question.

Of course, Garfield wouldn't go anywhere without his old pal Odie, and soon after arriving in the land of Big Ben, the clueless tomcat inadvertently changes places with royal look-a-like Prince (voice of Tim Curry).

It seems that Prince's owner, Lady Eleanor, has recently passed away, leaving the care of her sprawling estate Castle Carlyle in the capable paws of her devoted kitty companion.

The trouble is, Prince has decided it's time for a vacation, and with Garfield in charge there's no telling what kind of trouble will befall Castle Carlyle.

In 'Garfield Gets Real' (2007), tired with his routine as a comic strip star in Cartoon World, Garfield (voice of Frank Welker) escapes the page, with his dim-witted canine companion Odie, to live in the Real World with no prospect of return.

His initial excitement quickly evaporates when he realises he'll be spending his nights in a leaky old building and living off dumpster scraps.

When the local paper decides to replace the Garfield comic strip for good, he realises the enormity of his mistake and begs his old funny paper co-workers in Cartoon World to somehow find a way to bring him and Odie back before their strip is permanently cancelled.