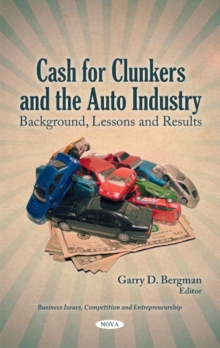 In an attempt to boost sagging U.S. auto sales and to promote higher vehicle fuel economy, the President signed legislation on June 24, 2009, establishing a program to provide rebates to prospective purchasers toward the purchase of new, fuel-efficient vehicles, provided the trade-in vehicles are scrapped.

The program was known as Consumer Assistance to Recycle and Save (CARS), or informally, as "cash for clunkers".

CARS ran for a month and during this period, 700,000 vehicles were traded.

This book outlines the key provisions of the CARS program and discusses the impact of the program on the economy and summarises similar programs in other industrial countries.