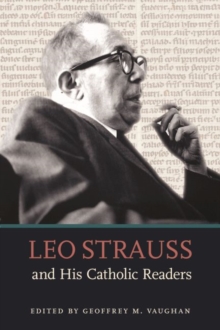 This book looks at the work and influence of Leo Strauss in a variety of ways that will be of interest to readers of political philosophy.

It will be of particular interest to Catholics and scholars of other religious traditions.

Strauss had a great deal of interaction with his contemporary Catholic scholars, and many of his students or their students teach or have taught at Catholic colleges and universities in America. Leo Strauss and His Catholic Readers brings together work by scholars from two continents, some of whom knew Strauss, one of whom was his student at the University of Chicago.

Some of the authors suggest that his approach can be a fruitful corrective to an uncritical reception of modern ideas.

Nevertheless, most point out that the Catholic cannot accept all of Strauss's project.

The second section deals with areas of overlap between Strauss and Catholics.

Some of the chapters explore encounters with his contemporary scholars while others turn to more current concerns.

The final section approaches the theological-political question itself, a question central to both Strauss's work and that of the Catholic intellectual tradition.

This section of the book considers the relationship of Strauss's work to Christianity and Christian commitments at a broader level. Because Christianity does not have an explicit political doctrine, Christians have found themselves as rulers, subjects, and citizens in a variety of political regimes.

Leo Strauss's return to Platonic political philosophy can provide a useful lens through which his Catholic readers can assess what it means for there to be a best regime.