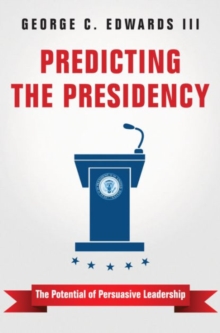 Predicting the Presidency : The Potential of Persuasive Leadership Paperback / softback

Millions of Americans--including many experienced politicians--viewed Barack Obama through a prism of high expectations, based on a belief in the power of presidential persuasion.

Yet many who were inspired by candidate Obama were disappointed in what he was able to accomplish once in the White House.

They could not understand why he often was unable to leverage his position and political skills to move the public and Congress to support his initiatives.

Predicting the Presidency explains why Obama had such difficulty bringing about the change he promised, and challenges the conventional wisdom about presidential leadership. In this incisive book, George Edwards shows how we can ask a few fundamental questions about the context of a presidency--the president's strategic position or opportunity structure--and use the answers to predict a president's success in winning support for his initiatives.

If presidential success is largely determined by a president's strategic position, what role does persuasion play?

Almost every president finds that a significant segment of the public and his fellow partisans in Congress are predisposed to follow his lead. Others may support the White House out of self-interest.

Edwards explores the possibilities of the president exploiting such support, providing a more realistic view of the potential of presidential persuasion. Written by a leading presidential scholar, Predicting the Presidency sheds new light on the limitations and opportunities of presidential leadership.