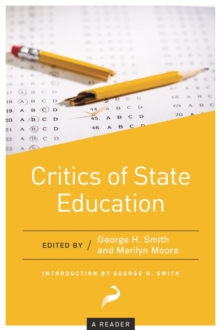 The relation between school and state in American liberal thought has a checkered past.

Many traditional heroes of American individualism, such as Thomas Paine and Thomas Jefferson, upheld some role for government in education.

Others, however, feared the consequences of placing control of education in the hands of a single group and supported the separation of school and state.

The preservation of individual freedom, according to those who were against state education, is the only legitimate function of government. Critics of State Education: A Reader contains articles, written during the 18th and 19th centuries, that oppose all state inference in the education of children, whether in the form of tax support for schools, compulsory attendance laws, mandated curricula, and so forth.

Many of the writers included here are virtually unknown even to historians of education, and most of their articles are reprinted for the first time