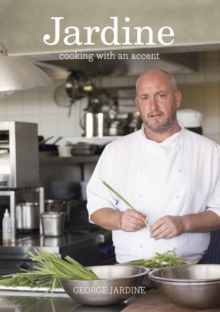 George Jardine is one of the most respected and innovative fine dining chefs in South Farica.

To get a table at his restaurant on Jordan Wine Estate during the summer season in the Western Cape, you need to book months in advance.

Despite this, he is respected among his peers in the industry as a straight-talking chef who is important with the celebrity nonsense that cloaks the top cooks in the country.

He is famous for dancing on stairs to podium at the Eat Out Awards to receive his umpteenth Top Ten award dressed in his signature cargo shorts and chef jacket.

In Jardine, his eponymous first cook book, George talks about what it takes to be a chef at top of his game.

First and foremost, he says, being a chef and a restaurateur is about building relationships.

You need to build a rapport and a mutual understanding with your customers, so they know how to enjoy the best out of your kitchen.

Then you need to find great suppliers and cement strong working relationships with them.

In the pages of Jardine, George has looked back over his award-studded time as a cook in South Africa and compiled a collection of recipes which define his style as a chef. Many of them are the very dishes which keep his fans and regulars flooding back to his restaurant.

He has kept nothing back, proving complete recipes which he handed out to friends and restaurants regulars to test at home before including them in Jardine.

The recipes also draw on all the amazing produce that is available to us right on our doorstep in South Africe.

As a Scot, married to a South African, and living in Stellenbosch he is constantly struck by just how mush beauty and wonderful produce surrounds us.

Whether it's mushrooms gathered in a local forest, guavas from the tree in the garden, or fish caught in our oceans, Jardine in Filled with recipes that explore the culinary bounty of Mzansi.