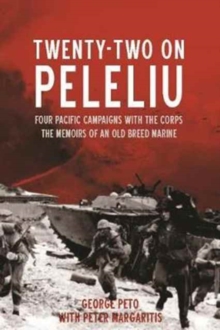 Twenty-Two on Peleliu : Four Pacific Campaigns with the Corps: The Memoirs of an Old Breed Marine Hardback

On September 15, 1944, the U.S. First Marine Division landed on a small island in the Central Pacific called Peleliu as a prelude to the liberation of the Philippines.

Among the first wave of Marines that hit the beach that day was 22-year-old George Peto. Growing up on a farm in Ohio, George always preferred being outdoors and exploring.

This made school a challenge, but his hunting, fishing and trapping skills helped put food on his family's table.

As a poor teenager living in a rough area, he got into regular brawls, and he found holding down a job hard because of his wanderlust.

After working out West with the CCC, he decided that joining the Marines offered him the opportunity for adventure plus three square meals a day; so he and his brother joined the Corps in 1941, just a few months before Pearl Harbor. Following boot camp and training, he was initially assigned to various guard units, until he was shipped out to the Pacific and assigned to the 1st Marines.

His first combat experience was the landing at Finschhaven, followed by Cape Gloucester.

Then as a Forward Observer, he went ashore in one of the lead amtracs at Peleliu and saw fierce fighting for a week before the regiment was relieved due to massive casualties.

Six months later, his division became the immediate reserve for the initial landing on Okinawa.

They encountered no resistance when they came ashore on D+1, but would go on to fight on Okinawa for over six months. This is the wild and remarkable story of an "Old Breed" Marine, from his youth in the Great Depression, his training and combat in the Pacific, to his life after the war, told in his own words.