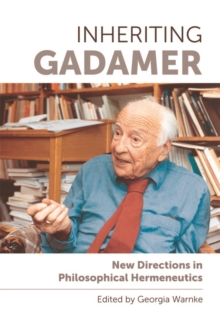 This collection expands on some of these areas and takes his hermeneutics into yet new fields including narrative medicine, biotechnology, the politics of memory, the philosophy of place and the non-verbal language of the body. And, building on Gadamer's well-known discussions with Heidegger, Habermas and Derrida, Inheriting Gadamer sets him in dialogue with Mahatma Gandhi, Christine Korsgaard, Charles Mills and others.

In these ways, the volume holds fast to a Gadamerian virtue: cultivating our important philosophical traditions while embracing the constant need to re-think their meaning in new circumstances and in relation to new knowledge.