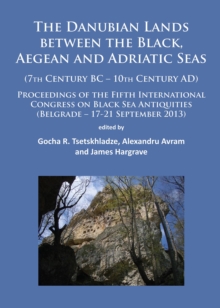 The themes of this volume are concerned with archaeological, historical, linguistic, anthropological, geographical and other investigations across the vast area (and different regions) through which the Argonauts travelled in seeking to return from Colchis: from the eastern shore of the Black Sea and the mouth of the Danube to the Adriatic.

Each particular study contributes to the ground research, helping to create a complete picture of the theoretical level of cultural and political development and interaction of different cultures.

The research and general conclusions concerning the social, ethnic, cultural and political development of the peoples who lived around the Black Sea shore and along the great Danube and Sava rivers can be reliable only if based on the detailed study of particular questions related to the extensive area stretching from the Black Sea to the Adriatic, and involving the many different peoples and epochs which lasted many hundreds of years.