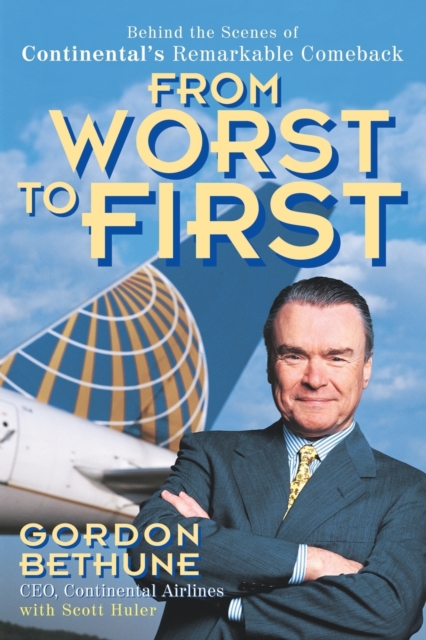 From Worst to First : Behind the Scenes of Continental's Remarkable Comeback Paperback / softback

The numerous anecdotes alone are worth the price of the book ...most readers will find themselves asking why everyone doesn't run a business as preached by the chief executive of Continental Airlines.-The Washington Post Book World ...in an age where managing seems increasingly complicated, some of Bethune's prescriptions are refreshingly straightforward.-Business Week From Worst to First outlines Gordon Bethune's triumphs ...about the turnaround he's led at Continental, a perennial basket case that's become an industry darling.-The Atlanta Journal-Constitution From Worst to First is [Gordon Bethune's] story of Continental Airlines' turnaround under his command ...The blueprint has worked ...Fortune magazine named Continental the company that has 'raised its overall marks more than any other in the 1990s.'-The Seattle Post-Intelligencer All of Gordon Bethune's proceeds from this book will be donated to the We Care Trust, a nonprofit organization that assists Continental Airlines' employees and their families in times of need.