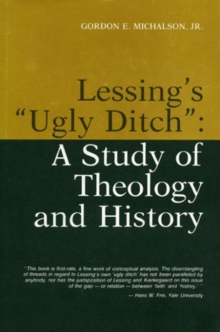 Lessing's "Ugly Ditch" : A Study of Theology and History Hardback

Christianity proposes claims that stand in some relation to history.

This linkage was captured in an image proposed by G.E.

Lessing in the 18th century when he spoke of an "ugly ditch" between historical and religious truths.

There exists a "ditch" because of the conceptual divide between discrete, contingent occurrences and religious truths of a presumably universal significance.

The "ditch" is ugly because there has been no obvious way of mediating this conceptually odd divide. This book aims to disclose the ways we have been misled or confused by the use of Lessing's image, the net effect of which is a series of misplaced theological battles due to an incorrect naming of the enemy.

The book is an effort to untangle those issues intrinsically important yet debated in confusing ways; it is a piece of philosophical writing with a theological interest.

The conclusion is that while this theological shadowboxing has been occurring, the crucial, substantive issue posed by Lessing's image has been neglected.

This is the issue of historical revelation and its relation to natural modes of human knowing and apprehension.