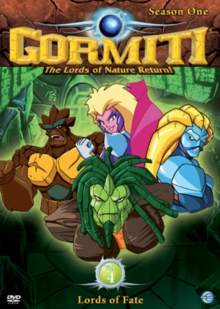 Fourth volume of episodes from the children's fantasy series following four friends who travel into a parallel realm to protect their city from the Gormiti creatures.

Nick (voice of Donn A. Nordean), Toby (Sam Riegel), Jessica (Melissa Fahn) and Lucas (Henry Banks) morph into Super Gormitis, each with a unique power, in order to battle against the evil forces in the Gorm Dimension.