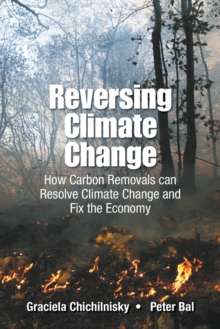 'The genius of Graciela Chichilnisky is recognized by economists and with this book she has focused that talent to the dire problem facing mankind.

To survive we must do more than stave off a further rise of CO2 in the atmosphere.

We need to reverse it if the planet is to be viable.

Professor Chichilnisky's achievement along with her co-author Peter Bal is to show us the way to rescue our future.'Professor Edmund Phelps2006 Nobel Laureate in EconomicsDirector, Center on Capitalism and Society, Columbia University'In the world of economic theory, Graciela Chichilnisky is an A-list star.'The Washington Post'The team of Chichilnisky and Bal has exceptional skill in explaining complex topics with great clarity making it easy for non-scientists interested in climate change to read.

They address the science of climate change, the complex international negotiations needed to reach a compromise between developing nations and the developed ones, and importantly the urgent need to find a way of extracting CO2 from the atmosphere and utilizing and sequestering it in a commercially profitable manner.

The last topic has been almost completely ignored by the media.'Theodore Roosevelt IVManaging Director & Chairman of Barclays Cleantech InitiativeBARCLAYSThe Kyoto Protocol capped the emissions of the main emitters, the industrialized countries, one by one.

It also created an innovative financial mechanism, the Carbon Market and its Clean Development Mechanism (CDM), which allows developing nations to receive carbon credits when they reduce their emissions below their baselines.

The carbon market, an economic system that created a price for carbon for the first time, is now used in four continents, is promoted by the World Bank, and is recommended even by leading oil and gas companies.

However, one critical problem for the future of the Kyoto Protocol is the continuing impasse between the rich and the poor nations.Who should reduce emissions - the rich or the poor countries?