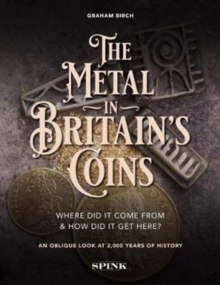 The Metal in Britain's Coins : Where did it come from and how did it get here? Hardback

The origin of the metals in Britain's coins is seldom discussed by numismatists, but this fascinating book shows what a compelling topic it can be.

Graham Birch's starting point is to de-code the provenance marks on coins and understand the motives behind their use and the messages they convey - mostly about power and money. Britain is a proud seafaring nation and its wealth often arrived on board ships; global traders such as the Royal African Company and the South Sea Company brought bullion from all corners of the world. Still more treasure was seized during wartime by brave sea captains, both navy and privateers. The book delves into the history of this wealth, and examines how coins minted from this treasure were used for propaganda or prestige in a pre-social media era.

Compared to trading or piracy, mining is a difficult route to riches, but for the last millennium, bold and sometimes foolhardy entrepreneurs risked everything to extract metals for our coins - logos and privy marks allow us to connect with the mines and the characterful people involved. The book spans two millennia, from Celtic staters to 21st Century silver minted from a 4,700m deep shipwreck, and will delight numismatists and anyone with an interest in economic history.