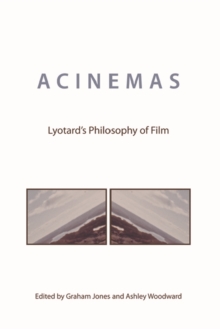 This collection presents, for the first time in English, Jean-Francois Lyotard's major essays on film: 'Acinema', 'The Unconscious as Mise-en-scene', 'Two Metamorphoses of the Seductive in Cinema' and 'The Idea of a Sovereign Film'.

Then, eight critical essays by philosophers and film theorists examine Lyotard's film work and influence across two sections: 'Approaches and Interpretations' and 'Applications and Extensions'.

These works are complemented by an introductory essay by leading French scholar Jean-Michel Durafour on Lyotard's film-philosophy, an overview of Lyotard's practical film projects written by his collaborators Claudine Eizykman and Guy Fihman, and the synopsis for a later film project Memorial Immemorial, which Lyotard proposed but was not produced.

Jean-Francois Lyotard was the most significant aesthetician of the poststructuralist generation, but this dimension of his thought is only recently beginning to receive the attention it deserves in the English-speaking world.

He devoted a number of essays to film, and was involved in making several experimental short films.

Lyotard's reflections on film offer a perspective which seeks to do justice to it as an art by focusing on its aesthetic, material qualities.

His work in this area remains a largely untapped resource, with the potential for inaugurating exciting new directions in film-philosophy.