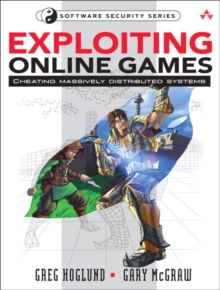 The online gaming world is huge and continues to grow (analysts estimate the market reached $12 billion in 2006). And all computer games are made of software. By manipulating, changing, tweaking, and otherwise exploiting the software that makes up a computer game, malicious gamers can cheat.

Cheating goes beyond getting a high score. In today's world of online poker, Second Life, and massive multiplayer online role playing games (MMORPGs) currency is a factor, whether it's winning a big jack pot or selling a "vorpal sword of heinousity" on e-Bay.

With money involved this spells out big headaches for game makers and players alike.

This no-holds-barred book comes fully loaded with code examples, debuggers, bots, and hacks, and exposes the inner workings of online game security for all to see.

With hundreds of thousands of interacting users, today's online games are a bellwether of modern software.

The kinds of attack and defense techniques described in Exploiting Online Games are tomorrow's security techniques on display today.