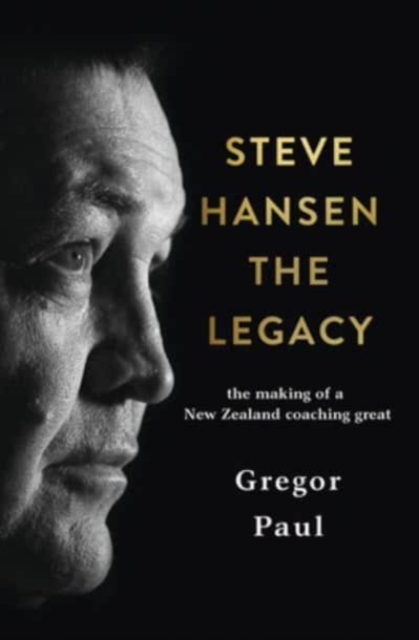 The making of a New Zealand coaching greatBetween the years 2012 and 2019, Sir Steve Hansen oversaw an era of such remarkable success that it would be almost impossible to repeat.

His 15-year career in the All Blacks coaching team is the heaviest footprint in rugby history.

Of the 210 tests he was involved with, his team lost just 25 times.

Of the 107 tests he served as head coach, Sir Steve accumulated a record 4 World Rugby Coach of the Year awards and orchestrated 93 victories - a winning percentage of 87 per cent, the highest of any All Blacks coach. Steve Hansen: The Legacy delves into the highs and the lows that earned the New Zealand rugby knight a place in the pantheon of world rugby coaching greats.

Revealing and perceptive, the book uncovers how Hansen dealt with the immeasurable pressure of leading the world's most famous rugby team; the tension created by being re-appointed specifically to win the Rugby World Cup; how he dealt with high-profile athletes and an exodus of New Zealand's all-time greats; the endless tug-of-war between commercialism and high performance; the increasing influence of referees on the game; the power battle between the northern and southern hemispheres; the Achilles heel that contributed to the All Blacks' 2019 Rugby World Cup loss; and how, during his career, he learnt to understand his weaknesses and use them to his advantage. Much more than a biography, in Steve Hansen: The Legacy, award-winning writer Gregor Paul tells the compelling story of the former policeman from Mosgiel, his quest for world rugby dominance and his journey to coaching greatness.