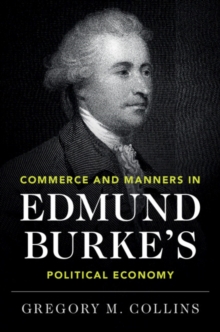 Although many of Edmund Burke's speeches and writings contain prominent economic dimensions, his economic thought seldom receives the attention it warrants.

Commerce and Manners in Edmund Burke's Political Economy stands as the most comprehensive study to date of this fascinating subject.

Collins integrates Burke's reflections on trade, taxation, and revenue within his understanding of the limits of reason and his broader conception of empire.

Such reflections demonstrate the ways that commerce, if properly managed, could be an instrument for both public prosperity and imperial prestige.

There is a grace to life that cannot be bought.