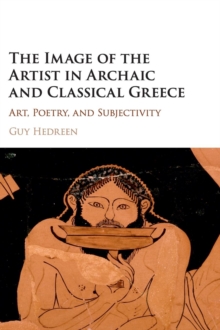 The Image of the Artist in Archaic and Classical Greece : Art, Poetry, and Subjectivity Hardback

This book explores the persona of the artist in Archaic and Classical Greek art and literature.

Guy Hedreen argues that artistic subjectivity, first expressed in Athenian vase-painting of the sixth century BCE and intensively explored by Euphronios, developed alongside a self-consciously constructed persona of the poet.

He explains how poets like Archilochos and Hipponax identified with the wily Homeric character of Odysseus as a prototype of the successful narrator, and how the lame yet resourceful artist-god Hephaistos is emulated by Archaic vase-painters such as Kleitias.

In lyric poetry and pictorial art, Hedreen traces a widespread conception of the artist or poet as socially marginal, and sometimes physically imperfect, but rhetorically clever, technically peerless, and a master of fiction.

Bringing together in a sustained analysis the roots of subjectivity across media, this book offers a new way of studying the relationship between poetry and art in ancient Greece.