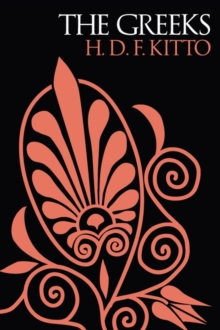 Most ancient cultures disappeared with scarcely a trace, their effect upon our modern way of life of little consequence.

The Greeks, however, continue to influence contemporary man through their drama, philosophy and art, their political cognizance and knowledge of science. There are many books introducing the Greek world to the modern reader, but this volume was recognized as a classic in the field upon its publication by Penguin Books.

It now appears in a new paperback edition, with a new preface by the author and 32 pages of photographs selected especially for the American reader. The Greeks introduces us to the people who formed and founded a new and distinct way of life, the democratic city-state.

The author presents--frequently in the words of the Greeks themselves--the formation of the people as a nation, the nature of the country, the impact of Homer, and the rise and decline of the city-state.

The book includes an intensive study of the classical period, and provides an illuminating view of the Greek mind, myths and religion, life and character. The Greeks is a recognized classic, written with remarkable grace and wit.

In its new, richly illustrated and permanent form, it will endure as perhaps the best reconstruction of one of the greatest episodes in the history of civilized man. H. D. F. Kitto (1897-1982) was professor of Greek at the University of Bristol and is well known as a scholar, teacher and writer in his field.

He wrote several books on Greek drama, and his In the Mountains of Greece resulted from extensive travel throughout the country.