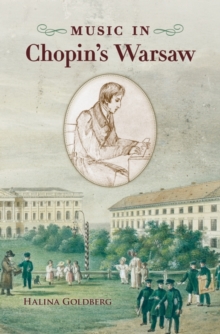 Music in Chopin's Warsaw examines the rich musical environment of Fryderyk Chopin's youth-largely unknown to the English-speaking world-and places Chopin's early works in the context of this milieu. Halina Goldberg provides a historiographic perspective that allows a new and better understanding of Poland's cultural and musical circumstances.

Chopin's Warsaw emerges as a vibrant European city that was home to an opera house, various smaller theaters, oneof the earliest modern conservatories in Europe, several societies which organized concerts, musically active churches, spirited salon life, music publishers and bookstores, instrument builders, and for a short time even a weekly paper devoted to music. Warsaw was aware of and in tune with the most recent European styles and fashions in music, but it was also the cradle of a vernacular musical language that was initiated by the generation of Polish composers before Chopin and which found its full realization in his work.

Significantly, this period of cultural revival in the Polish capital coincided with the duration of Chopin's stay there-from his infancy in 1810 to his final departure from his homeland in 1830. An uncanny convergence ofpolitical, economic, social, and cultural circumstances generated the dynamic musical, artistic, and intellectual environment that nurtured the developing genius. Had Chopin been born a decade earlier or a decade later, Goldberg argues, the capital-devastated by warfare and stripped of all culturalinstitutions-could not have provided support for his talent. The young composer would have been compelled to seek musical education abroad and thus would have been deprived of the specifically Polish experience so central to his musical style. A rigorously-researched and fascinating look at the Warsaw in which Chopin grew up, this book will appeal to students and scholars of nineteenth century music, as well as music lovers and performers.