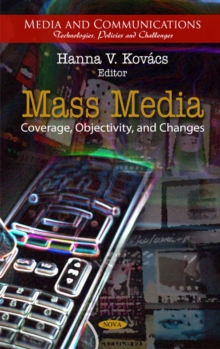 Over the past 20 years, significant evidence has accumulated supporting the use of mass media campaigns in smoking cessation efforts.

Studies have shown that smoke cessation campaigns can change beliefs and attitudes about quitting, increase motivation to quit and stimulate quit attempts.

Also discussed in this book is the role of mass media in shaping and presenting certain forms of national identity; the prosocial messages in animated cartoons; the political use of fear and news reporting in Italy; media depiction of risky driving and adolescent driving behaviors; and the Axelrod Model of social phenomena and mass media.