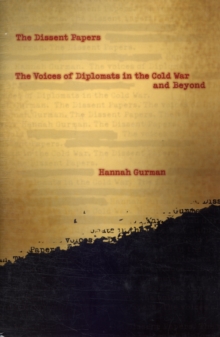 The Dissent Papers : The Voices of Diplomats in the Cold War and Beyond Hardback

Beginning with the Cold War and concluding with the 2003 invasion of Iraq, Hannah Gurman explores the overlooked opposition of U.S. diplomats to American foreign policy in the latter half of the twentieth century.

During America's reign as a dominant world power, U.S. presidents and senior foreign policy officials largely ignored or rejected their diplomats' reports, memos, and telegrams, especially when they challenged key policies relating to the Cold War, China, and the wars in Vietnam and Iraq.

The Dissent Papers recovers these diplomats' invaluable perspective and their commitment to the transformative power of diplomatic writing. Gurman showcases the work of diplomats whose opposition enjoyed some success.

Gurman follows the circulation of documents within the State Department, the National Security Council, the C.I.A., and the military, and she details the rationale behind "The Dissent Channel," instituted by the State Department in the 1970s, to both encourage and contain dissent. Advancing an alternative narrative of modern U.S. history, she connects the erosion of the diplomatic establishment and the weakening of the diplomatic writing tradition to larger political and ideological trends while, at the same time, foreshadowing the resurgent significance of diplomatic writing in the age of Wikileaks.