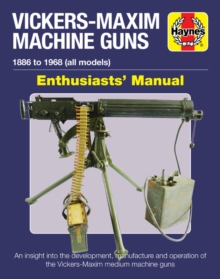 Vickers-Maxim Machine Gun Enthusiasts' Manual : An insight into the development, manufacture and operation of the Vickers-Maxim medium machine guns. Hardback

The Maxim gun was the first fully automated machine gun to be introduced into military service at the end of the 19th century.

Gradually refined to become the Vickers 0.303in medium machine-gun, it was used widely by British and Commonwealth forces in both world wars.

Operated by a three-man crew, it was popularly known as 'the Vickers'.

Firearms expert and acclaimed author Martin Pegler, a former Senior Curator of Firearms at the Royal Armouries Museum, Leeds, describes the concept of an automated machine-gun and its potential use for land forces; its genesis, design, development and early trials; and the introduction by the UK military of the Vickers machine gun and its adoption for infantry, aircraft and armoured vehicles in the world wars of the 20th century.