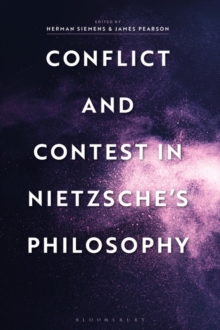 While Nietzsche's works and ideas are relevant across the many branches of philosophy, the themes of contest and conflict have been mostly overlooked.

Conflict and Contest in Nietzsche's Philosophy redresses this situation, arguing for the importance of these issues throughout Nietzsche's work. The volume has three key lines of inquiry: Nietzsche's ontology of conflict; Nietzsche's conception of the agon; and Nietzsche's warrior-philosophy.

Under these three umbrellas is a collection of insightful and provocative essays considering, among other topics, Nietzsche's understanding of resistance; his engagement with classical thinkers alongside his contemporaries, including Jacob Burckhardt; his views on language, metaphor and aphorism; and war, revolt and terror.

In bringing together such topics, Conflict and Contest in Nietzsche's Philosophy seeks to correct the one-sided tendencies within the existing literature to read simply 'hard' and 'soft' analyses of conflict. Written by scholars across the Anglophone and the European traditions, within and beyond philosophy, this collection emphasises the entire problematic of conflict in Nietzsche's thought and its relation to his philosophical and literary practice.