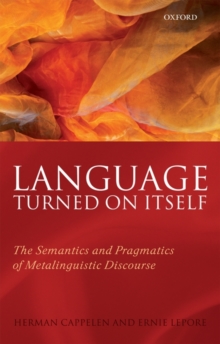 Language Turned on Itself : The Semantics and Pragmatics of Metalinguistic Discourse Paperback / softback

Language Turned on Itself examines what happens when language becomes self-reflexive; when language is used to talk about language.

Those who think, talk, and write about language are habitual users of various metalinguistic devices, but reliance on these devices begins early: kids are told, 'That's called a "rabbit"'.

It's not implausible that a primitive capacity for the meta-linguistic kicks in at the beginning stages of language acquisition.

But nomatter when or how frequently these devices are invoked, one thing is clear: they present theorists of language with a complex data pattern.

Herman Cappelen and Ernest Lepore show that the study of these devices and patterns not only represents an interesting and neglected project in the philosophy of language,but also carries important consequences for other parts of philosophy.

Part I is devoted to presenting data about various aspects of our metalinguistic practices.

In Part II, the authors examine and reject the four leading metalinguistic theories, and offer a new account of our use of quotation in a variety of different contexts.

But the primary goal of this book is not to promote one theory over another.

Rather, it is to present a deeply puzzling set of problems and explain their significance