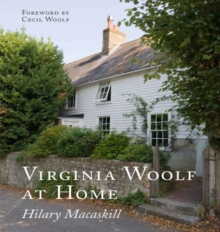 Virginia Woolf, figurehead of the Bloomsbury Group and an innovative writer whose experimental style and lyrical prose ensured her position as one of the most influential of modern novelists, was also firmly anchored in the reality of the houses she lived in and those she visited regularly.

Detailed and evocative accounts appear in her letters and diaries, as well as in her fiction, where they appear as backdrops or provide direct inspiration. Hilary Macaskill examines the houses that meant the most to Woolf, including:22 Hyde Park Gate, London - where Virginia Woolf was born in 1882Talland House, St Ives, Cornwall - the summer home of Virginia's family until 189546 Gordon Square, Bloomsbury, London - the birthplace of the Bloomsbury Group - Virginia lived here from 1904 to 1912Hogarth House, Richmond, London - where the newly married Woolfs set up home and founded the Hogarth PressAsheham House, East Sussex - the summer home of the Woolfs, 1912-191952 Tavistock Square, London - a return to Bloomsbury, the heart of LondonMonk's House, Rodmell, East Sussex - where Virginia lived from 1919 until her death in 1941