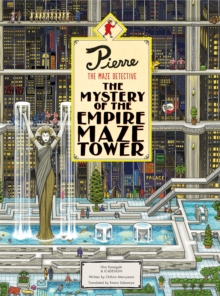 Pierre The Maze Detective: The Mystery of the Empire Maze Tower Hardback

Mr X the Phantom Thief is back, with a new evil plan!

He wants to steal the shining light from the top of the Empire Maze Tower, New Maze City's greatest treasure. Pierre and Carmen are called to New Maze City, along with others of the world's best Maze Detectives, to help solve the puzzles, protect the treasure and stop Mr X.

But can you help them make it in time?A thrilling new maze challenge adventure for Pierre the Maze Detective, for all detectives aged 8+.