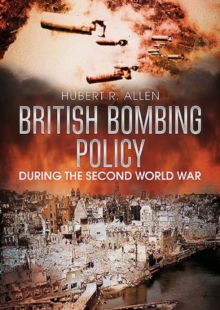 This book is unusual inasmuch as the author is not worried about being controversial.

He wrote this work in a frank manner using his personal experience.

In his preface he says: 'The experience of twenty-six years' commissioned service in the Royal Air Force, coupled with an enquiring mind, led me to write this book...'The book is not about the aircrews of Bomber Command.

Instead the book focuses on the policy and its wisdom.

He does not raise the cry 'morality', and rightly points out that the activities indulged in by Hitler and Stalin were not pleasant.

What he does do, with much relevant observation, is to point out what might have been achieved if British targeting policies had been thought through with greater intelligence.

At the end in a helpful appendix he quotes the post-war interrogation of Albert Speer: QUESTION: Which, at various periods of the war, caused most concern: British or American heavy bomber attacks, day or night attacks; and why?

ANSWER: The American attacks, which followed a definite system of assault on industrial targets, were by far the most dangerous.It was in fact these attacks which caused the breakdown of the German armaments industry. The night attacks did not succeed in breaking the will to work of the civilian population...