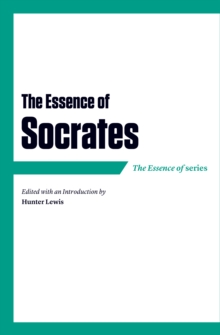 The Essence of Socrates Paperback / softback

Socrates is important to us for many reasons. First, he recognized the value of logic and showed us how to use it to discover truth.

Second, he led an exemplary and courageous life which cannot fail to inspire anyone who reads about it.

His calm and eloquent defense of himself during the final trial for heresy, which ended in his condemnation and execution, are among the most famous passages in world literature.

No one, apart from the great religious teachers, has had a more profound impact on human thought.

Socrates himself wrote nothing. Fortunately his pupils Plato and Xenophon recorded his sayings for posterity.

Indeed the connection between Socrates and Plato is so close that this little book could alternatively been titled The Essence of Plato.

The latter's philosophical treatises did not survive, so that all that remains to us is the Dialogues which mostly recount the life of Socrates. Axios Press's Essence of ...series takes the greatest works ever written in the field of practical philosophy and pares them down to their essence. We select the best passagesthe ones that are immediately relevant to us today, full of timeless wisdom and advice about the world and how best to live our livesand leave behind the more obscure or less important bits.

Our selections are not isolated: they flow together to create a seamless work that will capture your interest and attention from page one. And we provide useful notes and a solid introduction to the work.