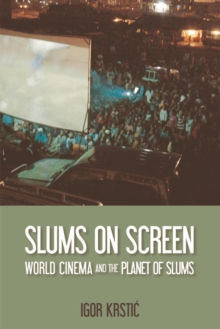 Slums on Screen : World Cinema and the Planet of Slums Hardback

Near to one billion people call slums their home, making it a reasonable claim to describe our world as a `planet of slums.' But how has this hard and unyielding way of life been depicted on screen?

How have filmmakers engaged historically and across the globe with the social conditions of what is often perceived as the world's most miserable habitats?Combining approaches from cultural, globalisation and film studies, Igor Krstic outlines a transnational history of films that either document or fictionalise the favelas, shantytowns, barrios poulares or chawls of our `planet of slums', exploring the way accelerated urbanisation has intersected with an increasingly interconnected global film culture.

From Jacob Riis' How The Other Half Lives (1890) to Danny Boyle's Slumdog Millionaire (2008), the volume provides a number of close readings of films from different historical periods and regions to outline how contemporary film and media practices relate to their past predeccesors, demonstrating the way various filmmakers, both north and south of the equator, have repeatedly grappled with, rejected or continuously modified documentary and realist modes to convey life in our `planet of slums'.