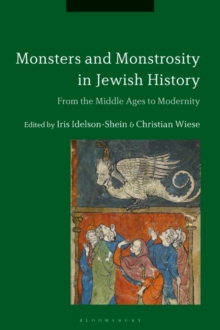 Monsters and Monstrosity in Jewish History : From the Middle Ages to Modernity Hardback

This is the first study of monstrosity in Jewish history from the Middle Ages to modernity.

Drawing on Jewish history, literary studies, folklore, art history and the history of science, it examines both the historical depiction of Jews as monsters and the creative use of monstrous beings in Jewish culture. Jews have occupied a liminal position within European society and culture, being deeply immersed yet outsiders to it.

For this reason, they were perceived in terms of otherness and were often represented as monstrous beings.

However, at the same time, European Jews invoked, with tantalizing ubiquity, images of magical, terrifying and hybrid beings in their texts, art and folktales.

These images were used by Jewish authors and artists to push back against their own identification as monstrous or diabolical and to tackle concerns about religious persecution, assimilation and acculturation, gender and sexuality, science and technology and the rise of antisemitism.

Bringing together an impressive cast of contributors from around the world, this fascinating volume is an invaluable resource for academics, postgraduates and advanced undergraduates interested in Jewish studies, as well as the history of monsters.