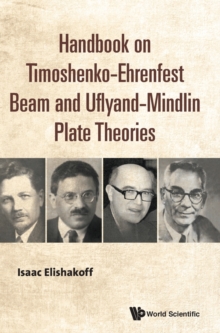 The refined theory of beams, which takes into account both rotary inertia and shear deformation, was developed jointly by Timoshenko and Ehrenfest in the years 1911-1912.

In over a century since the theory was first articulated, tens of thousands of studies have been performed utilizing this theory in various contexts.

Likewise, the generalization of the Timoshenko-Ehrenfest beam theory to plates was given by Uflyand and Mindlin in the years 1948-1951.The importance of these theories stems from the fact that beams and plates are indispensable, and are often occurring elements of every civil, mechanical, ocean, and aerospace structure.Despite a long history and many papers, there is not a single book that summarizes these two celebrated theories.

This book is dedicated to closing the existing gap within the literature.

It also deals extensively with several controversial topics, namely those of priority, the so-called 'second spectrum' shear coefficient, and other issues, and shows vividly that the above beam and plate theories are unnecessarily overcomplicated.In the spirit of Einstein's dictum, 'Everything should be made as simple as possible but not simpler,' this book works to clarify both the Timoshenko-Ehrenfest beam and Uflyand-Mindlin plate theories, and seeks to articulate everything in the simplest possible language, including their numerous applications.This book is addressed to graduate students, practicing engineers, researchers in their early career, and active scientists who may want to have a different look at the above theories, as well as readers at all levels of their academic or scientific career who want to know the history of the subject.

The Timoshenko-Ehrenfest Beam and Uflyand-Mindlin Plate Theories are the key reference works in the study of stocky beams and thick plates that should be given their due and remain important for generations to come, since classical Bernoulli-Euler beam and Kirchhoff-Love theories are applicable for slender beams and thin plates, respectively.Related Link(s)