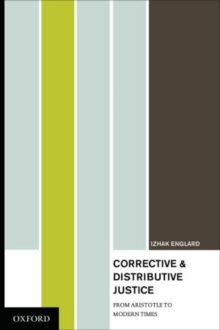 Corrective and Distributive Justice : From Aristotle to Modern Times Hardback

This distinction is elaborated in the 5th book of Aristotle's Nicomachean Ethics, which was rediscovered in Western Europe in the 12th and 13th centuries by the Scholastics and turned into a central topic in legal and theological scholarship.

After a decline of interest in the wake of theenlightenment and secularization, a surprising revival of these notions of justice occurred in U.S. legal and philosophical discourse during the last four decades that has made this distinction a central issue in tort law, restitution and other important fields of private and public law.

In literally hundreds ofarticles and a considerable number of books, the Aristotelian distinction has been elaborated, discussed, and applied. Englard's unique contribution to this aspect of legal history grants the contemporary reader a historical perspective that is vital for a deepened understanding of the distinction and modern concerns. Organized chronologically, Englard's research covers: Aristotle, High Scholastics, Late Scholastics, Post-Scholastics, and Modernity.

The relevant literature is notoriously difficult to access, not only because of its Latin language, but because of the physical rarity of the relevant booksscattered throughout the world.

This book offers the modern reader a touchstone synthesis of intellectual and legal history.