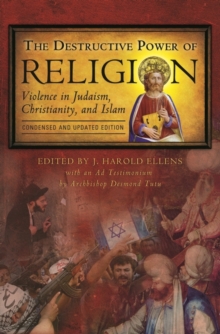 The Destructive Power of Religion : Violence in Judaism, Christianity, and Islam Hardback

Whether they fly airplanes into the World Trade Center or Pentagon; blow up ships, ports, and federal buildings, kill doctors and nurses at abortion clinics, exterminate contemporary Palestinians, or kill Israeli soldiers with suicide bombs, destructive religionists are all shaped by the same unconscious apocalyptic metaphors, and by the divine example and imperative to violence.

In this condensed edition of a multivolume set covering how Judaism, Christianity, and Islam all incorporate core metaphors that can spur violence, experts explain religious notions that fuel terrorism and other horrific actions.

The contributors warn that until destructive metaphors are removed from the Western psyche, an end to religious violence will not be possible. Hailed in reviews as unsettling but thought-provoking, compelling, and critical coverage, the set from which these chapters were drawn has a core theme that demonstrates the three major religions share the ancient notion that history and the human soul are caught in a cosmic conflict between good and evil, or God and devil, which cannot be resolved without violence, a cataclysmic final solution such as the extermination of nations, the execution of humans, or even the death of God's own son.

As Archbishop Desmond Tutu wrote, This is a groundbreaking work with tremendous insight.