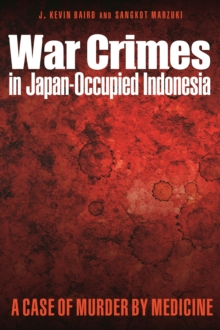 War Crimes in Japan-Occupied Indonesia : A Case of Murder by Medicine Hardback

Suddenly, one of the world's largest nations was at the service of the Japanese Imperial Army.

A highly successful campaign recruited young Indonesian men to support the Japanese war efforts, but hidden behind the facade of Asian brotherhood was a sinister truth-during the brief 40 months of Japanese occupation, as many as several million Indonesians were worked to death or summarily killed as expendable slave laborers known as the romusha. While many romusha were lost from all memory and record, nine hundred Indonesians were known victims of a brutal and immoral medical experiment perpetuated by an increasingly desperate Imperial Japan.

With the tide of the war turning and in dire need of a means to protect their troops from tetanus in anticipation of a land assault, the Japanese used romusha as human guinea pigs for a vaccine that had not been sufficiently vetted.

In a matter of days, all 900 patients had suffered protracted and agonizing deaths.

With the American and Allied forces poised to win the war, Japan needed a scapegoat for this well-documented incident if it was to avoid war crimes prosecution.

In War Cimes in Japan-Occupied Indonesia: A Case of Murder by Medicine, J.

Kevin Baird and Sangkot Marzuki chronicle the life and wrongful execution of Achmad Mochtar, a native Indonesian and renowned scientist, against the backdrop of a tropical medicine and the science of vaccination, not only to exonerate an innocent man, but also to provide a picture of a nascent country emerging from the ravages of colonization and occupation.