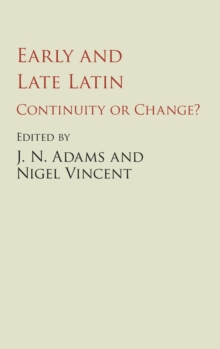 This book addresses the question of whether there are continuities in Latin spanning the period from the early Republic through to the Romance languages.

It is often maintained that various usages admitted by early comedy were rejected later by the literary language but continued in speech, to resurface centuries later in the written record (and in Romance).

Are certain similarities between early and late Latin all that they seem, or might they be superficial, reflecting different phenomena at different periods?

Most of the chapters, on numerous syntactic and other topics and using different methodologies, have a long chronological range.

All attempt to identify patterns of change that might undermine any theory of submerged continuity.

The patterns found are summarised in a concluding chapter.

The volume addresses classicists with an interest in any of the different periods of Latin, and Romance linguists.