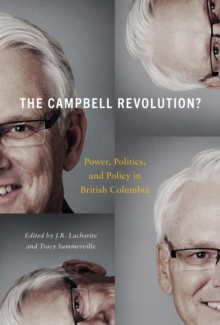 How are we to assess Gordon Campbell's decade-long premiership of British Columbia?

While to many he was an ideologue set on revolutionizing provincial politics, he was a far more complex figure - polarizing and unpopular, but also a shrewd party manager and successful political operator.

Beginning with a detailed account of Gordon Campbell's pre-Liberal Party political activities, The Campbell Revolution? then takes a broad look at the policy options open to him in the context of the neoliberal revolution that swept across Canada and elsewhere in the 1980s and 1990s.

Contributors discuss the Campbell administration's reforms in social, environmental, and economic policies, focusing on tax system reform, the arts and culture sector, healthcare, and urban development in the context of the 2010 Winter Olympics.

More than just a narrative of the career of an enigmatic public official, this book looks at specific public policy examples and asks whether Campbell led a revolution or simply rode a wave of change that had begun years before he came to power. A comprehensive examination of Gordon Campbell's leadership and governance style and the ideological underpinnings of BC's Liberal Party, The Campbell Revolution? examines how the Campbell administration attempted to transform politics in British Columbia in the twenty-first century.