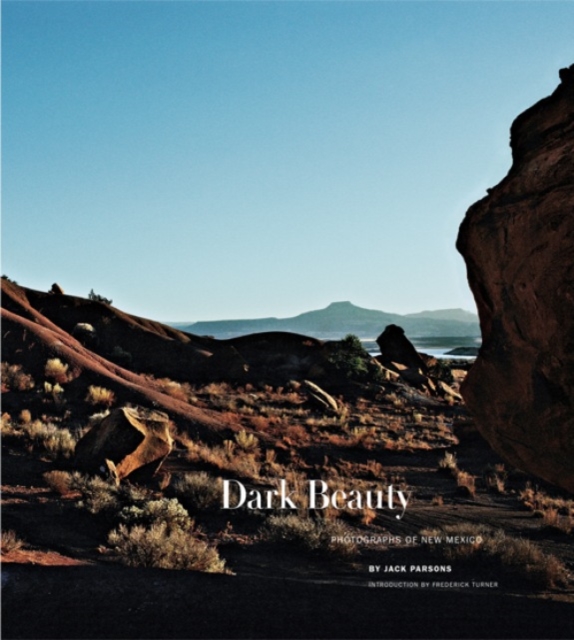 Jack Parsons has been investigating the incredible landscapes, amazing light, and diverse cultures of the American Southwest for more than thirty-five years, in turn becoming a master of photographic art.

He has been the photographer for fifteen acclaimed books, including the seminal 1993 publication of Santa Fe Style, which helped to chronicle and establish a regional aesthetic for New Mexico's architecture that is now recognized worldwide. In his commitment to capturing and comprehending the land and life of New Mexico, Parsons has made more than 400,000 photographs of every type of landscape and culture in the 'Land of Enchantment,' as New Mexico is called.

Dark Beauty features 100 of his rarely seen or published photographs of New Mexico, taken from the time of his arrival in the summer of 1969 right up to the present day. From captivating images of small towns, fiestas, and everyday life, to spectacular views of mountains, rivers, and plains, from enduring glimpses of old adobe houses, Pueblo villages, and religious structures, to refreshingly new views of murals, Main Streets, and iconography, Parsons presents a personal, elegiac narrative of his 'home place.' Seen as a whole, the photographs in Dark Beauty reveal a deep understanding and reverence for New Mexico's complex and rich history, unique multiculturalism, and unparalleled beauty.

With Jack Parsons as our guide, we gain a true sense and appreciation of New Mexico's lure as a uniquely American place. From the Preface"I first came to New Mexico in the summer of 1969, driving into Taos in the late afternoon in an old VW convertible.

I had gone to school in Boulder, and the West had been deeply imprinted on me.

My master's thesis was on D. H. Lawrence, and this had made me wonder what effect this magical land would have on me.

It didn't disappoint. Almost immediately, I fell in love with this difficult, demanding, dark, and profound world.

All that we take for granted having lived here-the beautiful, slanting afternoon light, the Sangre de Cristos turning a deep red as the sun starts to disappear, sagebrush plains stretching far to the west-all of this greeted me when I first arrived in Taos, and I felt that, after many years, I was finally home."-Jack ParsonsFrom the Introduction"Among the things I admire about the photographs of Jack Parsons is that he is not afraid of the picturesque.

He has not retreated from it nor found some arch way around it.

Instead, Parsons walks right up to his subjects and points his lens at mountains, sunsets, cloud formations, weathered buildings, and Hispanic art.

But he does so in ways that require us to really look at these things and ponder the meanings embedded in those very picturesque aspects of New Mexico that bring visitors out here while they turn many other artists away.

It takes an artist to evoke this long and yet unfolding drama, yet in virtually every one of the images contained in these pages it is here for us to discover.

But we have to be willing to look past the picturesque."-Frederick Turner