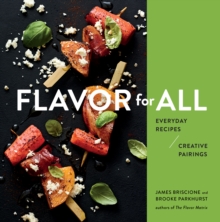 Flavor for All: Everyday Recipes and Creative Pairings Hardback

Simple, dynamic, flavor-packed recipes from the authors of The Flavor Matrix - informed by the science of flavour pairing but accessible enough for every cook. Fans were ravenous for more recipes from James Briscione and Brooke Parkhurst, authors of The Flavor Matrix, so the authors are serving up 100 new recipes in Flavor for All, drawing on the same principles and flavour-focused approach as their previous book.

This is, at heart, a practical home-cooking book with delicious and accessible recipes for everyday life, but with unique and unexpected twists based on scientifically approved flavor pairings.

Some of the recipes include Seared Steaks with Almond-Cherry Pesto; Brown Butter, Maple, and Pear Pork Roast; Milk-Poached Fish with Basil; and Chocolate and Red Wine Bread Pudding.

The book will explain why it is that certain flavors taste so good together and provide plenty of practical tips on how to coax the maximum amount of flavour from your ingredients.

This new cookbook will appeal to both chemistry aficionados and casual cooks alike, with simple, easy recipes that fit into an everyday menu. AUTHORS: James Briscione and Brooke Parkhurst are the husband-and-wife authors of four cookbooks, including the best-selling The Flavor Matrix.

James is a chef and Food Network personality who hosted the award-winning digital series Man Crafted and is featured on the new Food Network Kitchen app, which offers live and on-demand cooking classes.

He's the first-ever two-time Chopped champion and regularly appears on television as a host and judge.

James has appeared on Beat Bobby Flay, The Kitchen, Best Thing I Ever Ate, The Dr. OZ Show, and more. He was formerly the director of culinary research at the Institute of Culinary Education in New York City, where he led the school's collaboration with IBM on the groundbreaking project "Chef Watson." James and Brooke live in Pensacola, Florida and are the owners of Angelena's Ristorante Italiano.