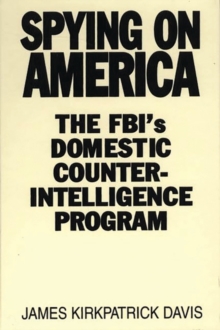 COINTELPRO. An acronym for Counterintelligence Program, this is the code name the FBI gave to the secret operations aimed at five major social and political protest groups--the Communist party, the Socialist Workers Party, the Ku Klux Klan, black nationalist hate groups, and the New Left movement.

Spying on America, the first book to chronicle all five of the operations, tells the story of how the FBI, from 1956 until COINTELPRO's exposure in 1971, expanded its domestic surveillance programs and increasingly employed questionable, even unlawful, methods in an effort to disrupt what amounts to virtually our entire social and political protest movement.

Violations of citizens' constitutional rights were rampant, and the secret operations actually resulted in a number of deaths.

At the time, neither the public nor the news media knew anything about COINTELPRO.

In vivid detail, Spying on America demonstrates that the system of checks and balances designed to prevent such occurrences was simply not functioning--until an illegal act uncovered the secret activities. The book opens with the daring raid of a Media, Pennsylvania FBI office by a group that adeptly used its booty--about 1,000 classified documents--to make COINTELPRO operations public.

The burglars, who called themselves the Citizen's Commission to Investigate the FBI, used sophisticated methods (the FBI never caught up with them), releasing copies of incriminating documents to the media at carefully timed intervals.

Spying on America draws on newspaper and magazine articles, interviews with many of the people involved, and FBI memos to trace the historical beginnings and operating methods of COINTELPRO efforts against each of the five targeted groups.

In vivid detail, the author re-creates the reactions of the bureau--including the subsequent policy changes--as well as the response of the news media and the resulting shift in public attitudes toward the FBI.

Finally, Davis looks at the possibility of similar operations in the future.

In the context of our current, heightened state of socio-political awareness, it is difficult to comprehend how so many unlawful deeds could have been committed without the public's knowledge.

Spying on America makes us aware of how easily such activities can occur--and in doing so, helps us prevent them from happening again.