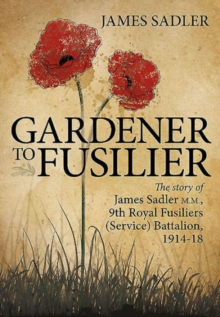 4 August 1914 saw the British declaration of War on Germany and, in his 'digs' in Hampton, Middlesex, nurseryman James Sadler resolved to enlist to serve and play his part in what was to become known as the Great War 1914-18. 28 August 1918 saw the same man, now infantryman Sgt.

James Sadler M.M, being stretchered away from the battlefield at Hardecourt aux Bois in France, his part in the conflict complete.

During the interim period, James Sadler had seen action on a number of the major battlefields on the Western Front, including Armentieres, Ploegsteert, Loos, the Somme, Arras, the German Offensive of 1918, and the Allied Advance in the final 100 Days. In Gardener to Fusilier: The story of James Sadler M.M., 9th Royal Fusiliers (Service) Battalion, 1914-18, his son, James Sadler, takes the record that his father made as he convalesced in the family home in Swanage on return from France, and combines this with his own research into his father's experiences.

These are coupled to those of the 9th Royal Fusiliers (Service) Battalion, the unit in which his father served during that period, forming part of Kitchener's First Army in the 36th Brigade and the 12th (Eastern) Division. The story of one infantryman's experiences are intertwined with those, often brief, details given from his Battalion's War Diary, giving insight into what he and his comrades faced in the campaign.

This account not only includes the first hand recall of the thoughts and aspects of facing battle, but also includes one man's personal comments on what he was asked to undertake, those whom he served with and under and the, often ignored, aspects of the routine and drudgery which were also part of the experience. Gardener to Fusilier makes no attempt to generalise about the British Tommy of the First World War; it aims at being the honest recall of one man and his fighting unit in a conflict which, even today, leaves its mark on our society and world.